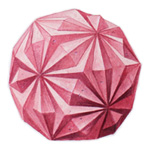 
While the compass needle conventionally indicates magnetic north, the true north corresponds to the imaginary and constantly moving point of the geographic North Pole, in which all the meridians converge and from which every direction can only lead south. In absolute antithesis to the latter, the impervious and unreachable north stands out as a destination for countless expeditions, yet never completely conquered: a region that hosts dangers and wonders – from the aurora borealis to the arctic mirages and the natural treasures trapped in amber – whose rhythms are punctuated by the polar night and the midnight sun.
More than an accurate position on a map, the term “true north” therefore evokes a place of extremes. Above all, it suggests a mutable and relative concept, the idea that there may exist a highly subjective true north in the imagination of each of us.

For El Gato Chimney, it's that of the perennial ice, but also of the rocky desert of Mongolia, of the tundra of the Inuit and the Sami. The true north of the artist isn't subordinated to topography: it's found where popular magic and shamanic tradition still dominate over reason, but, in particular, where man hasn't been able to prevail over nature, thus adapting himself to its will.
Window To The North, one of the large-format watercolors that form the True North exhibition, excellently exemplifies the notion of the subjectivation of the north. The work depicts an inuksuit, a monument made up of piles of stones, belonging to the cultures of the peoples of the Arctic region. These minimal interventions on the landscape, precursors of Land Art, have a dual function: that of serving both as a reference point and as a sacred place. But, above all, they act like windows and portals, able to frame what is in the visual field and beyond, to mark immaterial thresholds. Through these metaphysical openings it's possible to identify the object of one's own interest, to delimit it and to enclose it between the rock and the earth – in the powerful ritual of superimposing one's inner world to the one that looms beyond the cleft.
Even in the case of At The Shrine, the north represented doesn't correspond to the canonical one covered in snow, and once again an archaic altar of a primordial cult stands on the rest of the work, as if the artist wanted to remember that his influences are inextricably related to magical primitivism. An ovoo is a structure formed by a stack of stones that rises from the plains of the Gobi: conceived as a rudimentary temple for the veneration of the sky and the mountains, during the crossing of the desert it's common to turn around it three times clockwise, in order to guarantee a safer journey.
Yet the snow isn't lacking. During the research on which his artistic practice is based, El Gato Chimney stumbled upon the singular etching of a sphinx made of snow, at the bottom of a book concerning the German Arctic expeditions of the late nineteenth century, which however didn't provide any explanation on the origin of this image. This figure perhaps embodies the spirit of the whole show: hermetic in its deepest essence, it can only induce wonder and invite the observer to solve the enigma. Riddles In The Snow, with its atmosphere suspended in space and time, refers to a crystallized silence, punctuated at times by the crimson – as unexpected as vivid – of innumerable red cardinals that bring mystery to the already inexplicable composition.
Of the latter, In Search For True North and Storyknife capture the limpidity and the rarefied sensations, and above all carry forward the desire for knowledge and discovery of an uncharted and intimate north. In particular, Storyknife, in telling through its title the Eskimo tradition that consists in drawing stories, on mud and sand, with the tip of a specially carved ivory knife, enunciates the artist's will to continue to draw inspiration from these cultures at the extreme edges of the earth – and at the same time, to pass on their suggestions, often too insubstantial to survive independently.

The speculations on the ambivalent quality of the north go far back from the old times to the present ones, but it's mainly during classical antiquity that sharply divergent legends on this liminal place flourish. Two out of all: the one that sees it as a place enveloped in eternal darkness, and its exact opposite, destined to alternate and intertwine over the centuries.
Even the Greeks – from the Homeric poems to Aristotle, who strongly declares the superiority of the Mediterranean peoples – describe it as a region of ineffable barbarism, dominated by a darkness that is as tangible as it's metaphorical. On the other hand, according to the Greek explorer Pytheas of Massalia, who mentions it for the first time in his travel reports, the then-known world ended at Thule, a legendary island located six days sailing north from the current Great Britain. Thule, later named by the Roman poet Virgilio as “ultima” – extreme – and therefore peremptorily border of the world beyond which the unknown unfolds, becomes in this way a synonym for all the unexplored territories, full of charm and just as much risk.
Thus it's curious to learn that in the same period could exist a diametrically opposed point of view on the north, which hypothesized the existence of another island, this time idyllic, as described by the Greek historian Hecataeus of Abdera: «In the ocean facing the Celtic Gaul, northward, there is an island, no smaller than Sicily, inhabited by the Hyperboreans, so called because they live beyond the north wind. This island enjoys a mild temperature; its soil is fertile, it produces every kind of harvest [...] The inhabitants worship Apollo more than any other deity. [...] On this island there is a magnificent forest of Apollo and a noteworthy temple, circular in shape, adorned with many votive offerings». Almost as to promise a sort of earthly paradise as a reward for the few explorers capable of overcoming the hostility of the north, and partly to explain the complex attraction that it exerts on man.

As always, El Gato Chimney reconciles both visions in his dual cosmos, fully aware of the fact that solar cult would have no reason to exist in a place without darkness. The emblematic red threads seem to connect the two universes, as well as the artifacts suspended between heaven and earth – objects of everyday use that belong to the Apollonian world of rationality, and which at the same time possess the supernatural characteristics of the Dionysian one.
In re-elaborating the conceptual themes of his previous exhibitions in the spaces of the gallery, the artist further refines his creative process, aimed at bringing to light the subterranean correspondences between the results of the researches of his studies in the fields of animal anthropology, popular magic, shamanism. Above all, he examines in depth the notion dear to him of the circularity of human thought, which causes the Apollonian temple of the Hyperboreans to be identifiable as Stonehenge, which in turn is perhaps the best known among the many monuments of worship erected by the populations that, being deprived of it for most of the year, need more than all the others the favors of the sun.

The whiteness of the papers reflects that of the landscape and those who live there – the ivory and the coats of the animals, the organic treasures torn from these lands – declined in infinite shades because ice and snow, like the idea of the north, are iridescent and fickle: they melt and transmute.
In an interview released in 1965 to the American magazine Life, Andrew Wyeth, a painter of northern masterpieces such as Self-Portrait: Snow Hill (1989), said: «I do an awful lot of thinking and dreaming about things in the past and the future – the timelessness of the rocks and the hills – all the people who have existed there. I prefer winter and fall, when you feel the bone structure of the landscape – the loneliness of it, the dead feeling of winter. Something waits beneath it, the whole story doesn't show».
In the same way, El Gato Chimney abandons for the moment the usual colorful palette in favor of the sober tones of winter, and dedicates himself to an introspective and rigorous research in order to innovate the iconographic language of natural history, pushing further and further north, on a fictitious journey in search of its most elusive quintessence. 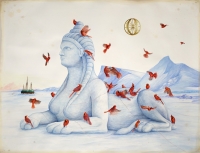